"The artists, both originally from United Kingdom, portrayed on more than sixty artworks the feelings of rebellion and disunion of their country of origin, fuelled even more in the latest years by political and administrative decisions that lead into Brexit. These themes are explored through portraits and figurative subjects, painted with chalk, conté, pastels, spray paint on different supports.

Guy Denning, born in England in 1965, started painting in the ‘80s, associating himself with the second wave of punk, painting on the streets and finding inspiration from the band CRASS and the photo-montage visions of artist Gee Vaucher.His art, fruit of years of self-taught work, is the result of a socio-political analysis of contemporary world, with particular interest for environmental issues, movements of rebellion and protest.Since the early ‘90s, along participating in events and street art festivals, he exhibited in dozens of solo and group shows everywhere in the world and his works are part of public and private collections, including the MAGI’900 Museum in Pieve di Cento.Since 2007 Guy Denning has lived and continues to work in Finistère, France.

8Mail, born in England in 1999, starting at the age of 13 he has painted at Upfest, Europe’s largest street art festival and his participation has been confirmed every subsequent year.Student at Central St Martins in London, his artworks often depict riots, protests, fights scenes and migratory movements, cause by socio-political instability around the world.Apart from participating in street art festivals, he has exhibited at various group shows in London, where he currently studies, works and lives." -Passage from Tales of Art gallery - https://talesofart.it/en/2018/02/mostra-doppia-personale-disunited-kingdom-guy-denning-e-8mail/ 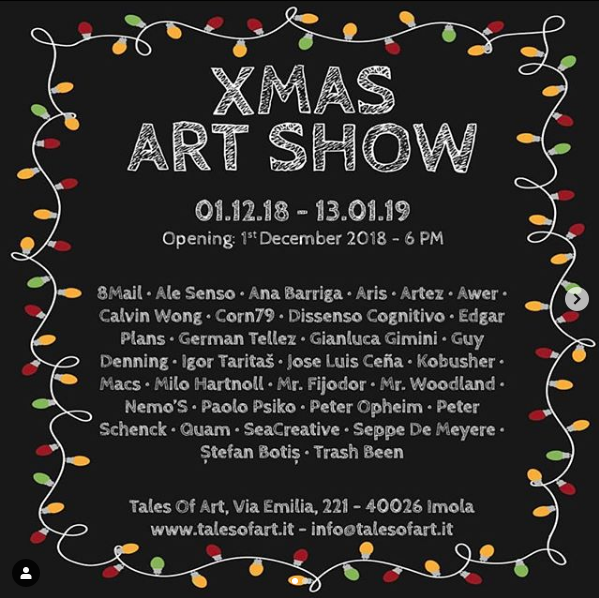 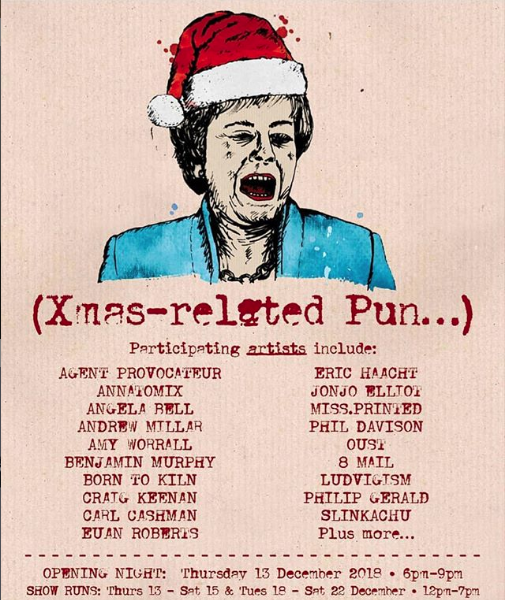 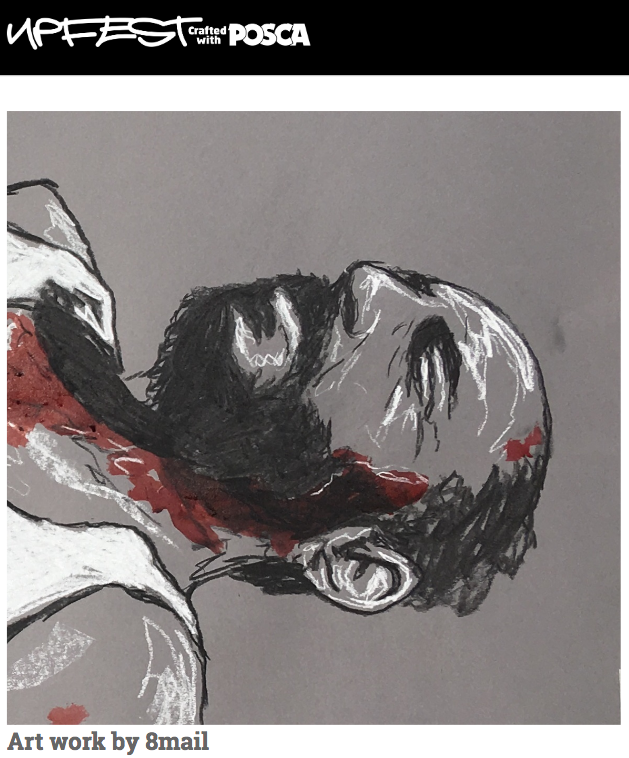 8Mail is a contemporary and urban artist, primarily using charcoal and chalk to capture chaotic and fleeting moments. He recently exhibited with Guy Denning in a joint show in Italy, and has painted at the last 6 Upfests. 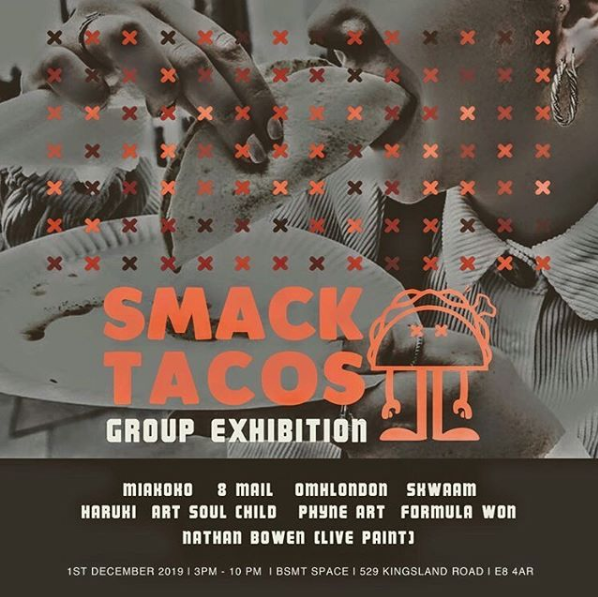 8Mail was part of a group exhibition with Smack Tacos at the BSMT space in Dalston Junction, December 2019 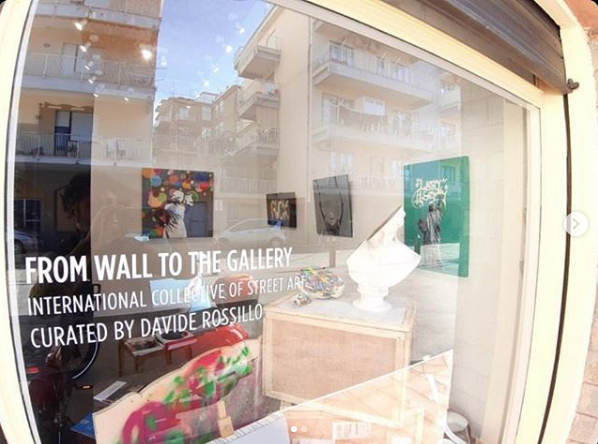 From Wall to the Gallery, Group Exhibition

In late December 2019, 8Mail was also exhibited in Gaeta, Italy at the Street Art Place Gallery, as part of a group exhibition. 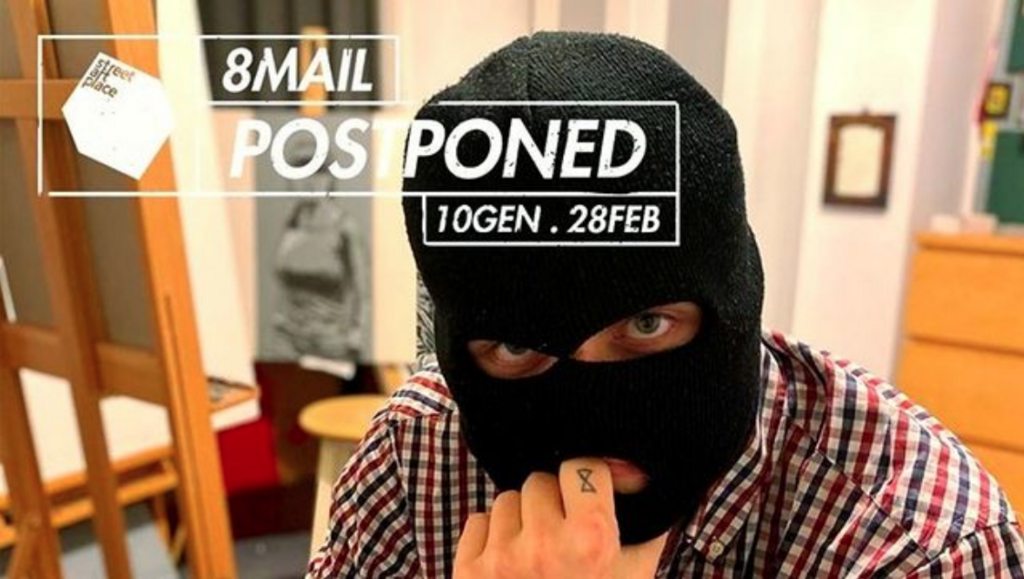 First Italian solo exhibition by 8mail named “Postponed” is the artist’s overview about last year facts and effects, particularly focused on a topic very tied to the artist: protests. 2020 Pandemic, apart from a worldwide sanitary collapse, has also led to an economic and social crisis.

In the Western countries, protest reasons have been related to the weakening of many labor sectors and to the limitations concerning social behaviours. The show itself, scheduled in May 2020, has been postponed many times due to the contingent restrictions.

The exhibition showcases cardboards portraits of policemen during Covid19 time as suggested by the presence of an additional surgical mask over their uniform. Specifically in Gaeta, portraits are dedicated to italian policemen among the others, all in chalk and charcoal technique.

Among canvases and cardboards, an installation projects a protester on a wall: a torch coming from inside a police helmet shines upon a hand-carved visor creating the image. The art piece named “Confront” aims to be provocative and exhortative at the same time.

Apart from policemen portraits, the artist depicts on wood some policemen squad in riot uniform, where diagonals belonging to the blackjacks and shields squared shapes contribute to make the scene full of tension, emphasized by the use of black and white colours. The four woods in the show have one further element in common: the lack of an antagonistic part, an emptiness all around the characters to isolate the action in the moment of their reaction.

This is not something new for 8mail, interested in “uncivilized behaviours in a civilized world”.

In fact, “Las Tesis” series, dedicated to the last riots for women rights is also shown in the exhibition, too.

Born in 1999, into the graffiti scene since when he was thirteen y.o., 8mail keeps on taking care of protests, urban riots and socio-political crisis. His world is made of antiheroes, where each character provoques fear and compassion at the same time, as if he was a part of an allegorical scene of trench warfare set in the Third Millennium. In 8mail’s work, protest reasons are not relevant; his characters are representative of each and every human being's brutality and cruelty. Violence actions, bleeding bodies, aggressive gestures are chosen by the artist who decontextualizes them and leaves them with no colour to make them icons of a civilized world where inequalities, discontent and unhappiness still happen.